On my way to the office this morning, the panhandler who calls me "Smiles" was at his post, for the first time this week, and as he does most of the mornings that we see each other, he said good morning, and called me "Smiles", and it made me smile, and we wished each other a happy new year.

Of course, soon I won't be walking by him every day, and there's a good chance we'll never see each other again, despite seeing each other several times a week for the better part of three years.

So it goes with those people who become part of our routines without becoming part of our lives. I think about these people in my life a lot, and wonder if they think of me sometimes, too.

The first time I really tuned into it was at a noodle shop in Chinatown that Aileen and I used to frequent. We almost always had the same server, and he came to recognize us, especially as a pair, but the couple of times either of us went in without the other, he would exclaim about the other's absence. And the couple of times we brought a third with us, he exclaimed about that, too. I haven't been back there since the breakup, but I know he wouldn't recognize me, both because I look very different now, and because there would be no context clue to help him know me, so that moment in recognition and stranger connection has passed. I wonder how he is.

It's easy to think about and wonder about -- and these days of the internet, find out about! -- people who were once a big part of my life and now aren't. And because those relationships are often better defined, they may have less of a sense of open-endedness, emotionally. A. and I didn't know that the last time we went in for noodles together would be the last time we did that, and so certainly not that it would be a last time to say hello or goodbye to noodle man.

Of course there are lots of people like this in a life. There's the woman I used to buy avocados from in Xela, and the one who sold me eggs. There's the crossing guard I used to pass every morning on my way to the T when I lived in Medford. There are all the vendors around my office now who I see and chat with every few days while I wait for a sandwich or a slice of pizza. 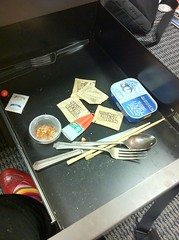 Last day at this desk!
Collapse